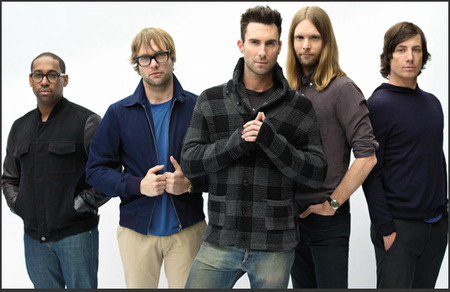 Maroon 5 provided much of the inspiration for “Time Difference”, particularly with songs like “Makes Me Wonder”.

Their sound is a fusion of pop-rock and funk, made instantly recognizable by Adam Levine’s distinctive high-pitched vocals.

The original members of Maroon 5 had met in college and been playing together since the mid-90s, but it took until 2000 for the band proper to form, and 2002 for the release of its first album, “Songs about Jane”.

It took another two years of relentless touring and promotion, and the 2004 release of their second single “This Love” for Maroon 5 to finally break through and find mainstream success.  The next single, “She Will be Loved” repeated the success of its predecessor and the album eventually went multi-platinum in the US and many countries around the world… but it took a good 2-3 years of hard work to get there.

Maroon 5 followed up with the cryptically-named “It Won’t Be Soon Before Long” in 2007 and “Hands All Over” in 2010 (produced by the legendary Robert John “Mutt” Lange), both of which went platinum and yielded a number of hits, most notably “Makes Me Wonder” (2007) and “Moves Like Jagger” featuring Christina Aguilera (2010), their biggest-selling song to date...

Lead singer-guitarist Adam Levine has written or co-written all of the band’s songs to date, with keyboardist Jesse Carmichael co-writing many of the songs and guitarist James Valentine also co-writing.  Many songs on 2010’s “Hands All Over” were also co-written with outside producers and writers including Sam Farrar and Shellback.  Surprisingly, Lange is not credited with any writing on that album.

The fourth album, “Overexposed” is due out later this month (June 26) and the lead single “Payphone” (featuring Wiz Khalifa) has already been released.  At the same time, keyboardist and frequent songwriter Jesse Carmichael has announced an indefinite leave of absence from the band.  This will undoubtedly mark a new chapter in the story of Maroon 5…

Watch the full playlist below or on my YouTube channel – or click the song title for the corresponding video.