I am releasing today the “Musicity / Inside Out” EP including both tracks from the album “So That’s How It Ended…” plus an alternate, previously-unreleased version of “Inside Out” featuring Fay Cannings. The songs are thematically related, therefore I thought it would be worthwhile to present them together, as one unit. 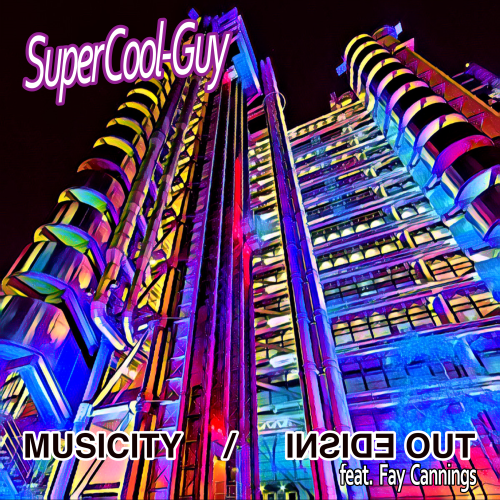 The “Musicity / Inside Out” EP is available now on all digital music platforms. Here’s the links:

I have already covered this track in a previous blog post – see here.

SuperCool-Guy · Inside Out (feat. Fay Cannings)

Back in 2018, Fay Cannings and I were invited by Nick Luscombe and the Musicity project to produce an original piece of music about the Lloyds building, located in the City of London.

This became “Inside Out”, unveiled with a live performance on 21 July 2018 and made available through Musicity’s on-location listening app – see here and here – where it can still be accessed at https://mscty.space/track/inside-out.

While many other Musicity pieces tell their story through location-based sound sampling, I chose to eschew sound effects in favour of a traditional song format and to tell the story through lyrics (scroll to the bottom of this blog post for a commentary on the song’s lyrics). Musically, I made it a pop-rock style broadly contemporary to the building’s 1986 inauguration.

We had just one month to deliver the track, with me writing/producing it and Fay Cannings singing it. The mix was subsequently fine-tuned and remastered in 2021 for inclusion in “So That’s How It Ended…”. This was the first time it became available outside the Musicity on-location listening app.

SuperCool-Guy · Inside Out ("We Took A Risk" Mix)

I experimented with several options for the bridge. One of these alternate options is presented in the previously unreleased “We Took a Risk" Mix.

You took a risk and you won my heart

You had me reassured right from the start

It was clear that you were reaching for the stars

Tucked away behind narrow City streets

And we had this song on our lips

Can you hear me sing it tonight?

Some called it wrong, but to me it just feels so right

The times are changing and you’ve made the Grade

Your striking features, they will never ever fade

Oh won’t you hold me once again...

Can you hear me call you tonight?

Can you hear me call you tonight?

Inside Out – Lyric commentary

The lyric is constructed as a love song which can be understood on two levels: love towards a man, and love towards the Lloyds building. Even without prior knowledge of this second level, the song still works, but some of the particulars may be a little puzzling:

Verse 1, Line 1: “took a risk” – reference to Lloyds – headquartered in the Lloyds building – which is an insurance and reinsurance market. Insurance is the business of taking risks.

Verse 1, Line 3: “reaching for the stars” – perhaps an allusion to the ambitions of the architect?

Verse 1, Line 4: “behind narrow City streets” – where the building is located (“City” here means the “City of London”).

Chorus, Line 3: “some called it wrong” – the building’s inside-out architecture has been highly controversial.

Verse 2, Line 1: “you’ve made the Grade” – the building received Grade I listing (as a “building of exceptional interest”) in 2011.

All other lines in the song could apply both to a person or a building.