I friend of mine noted that “One Of These Days” is very reminiscent of Wilson Phillips… remember them? 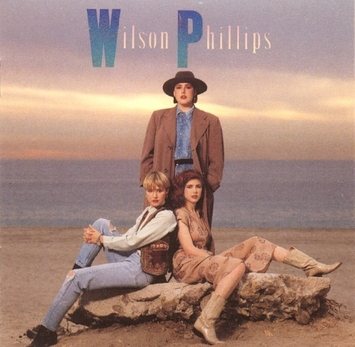 Wilson Phillips took the world by storm in 1990 – seemingly out of nowhere – with the breakthrough hit single “Hold On” and that beautiful music video shot in in the great California outdoors.

The self-titled debut album sold over 10 million copies and spawned 5 hit singles – 3 of which went to #1 in the US (“Hold On”, “Release Me”, “You’re In Love”) plus “Impulsive” and “The Dream Is Still Alive” – making Wilson Phillips the biggest-selling female band of all time (at that point)...

The girls – and their music – in fact didn’t quite come “out of nowhere”.  Carnie and Wendy Wilson are the daughters of The Beach Boys legend Brian Wilson, and Chynna Phillips the daughter of John and Michelle Phillips of The Mamas & the Papas.  The girls, their sound and their videos embodied the “California Dream”, and their trademark harmonies were heavily influenced by The Beach Boys.

They have embraced those influences, as further evidenced by their 2004 comeback album – titled “California” – and the upcoming 2012 album “Dedicated”, which will be a tribute to The Beach Boys and The Mamas & the Papas.

The album was produced and half the songs co-written by star songwriter/producer Glen Ballard, whose impeccable production was a major factor in the record’s success.  Glen Ballard has worked with a long list of top artists from Michael Jackson to Alanis Morrissette.

The musicians and staff credited on the album are a who’s who of 80s/90s California pop, with guest appearances by Joe Walsh (The Eagles) and Steve Lukather (Toto) among others.

The girls wrote 6 of the 10 songs on the album, 5 of which in collaboration with Glen Ballard.

Clearly the songs were very strong, the themes universal, and the production was top-notch.

There were other factors to their success...

Chynna Phillips’ blond bob haircut for example.  I know it sounds ridiculous, but she wasn’t just beautiful, she had a unique, immediately recognizable look that would preface the “Friends” look of the 1990s for women.

The three girls actually shared a “girl-next-door” quality, combined with the “California girl” glamour, that made them stand out from other pop stars.  And they each had a personality that connected with their audience.  In a way, they were one of pop’s first “celebrity” acts.

Wilson Phillips released another studio album – 1992’s “Shadow and Light”.  Although this was another strong album – once again produced by Glen Ballard – it failed to generate the excitement of the first, and the group disbanded shortly afterwards.

The Dream Is Still Alive

The band reformed in 2004 for the “California” covers album, and followed up with a Christmas album in 2010.  Another album of covers is due for release in April 2012.  The girls undeniably add something to the songs they cover – with their recognizable harmonies and sound – but I personally would get more excited if they came out with new original tunes…  Let’s hope.

Here’s below and on my YouTube channel a playlist of the music videos for: