I am releasing today the “Ophelia” lyric video and an EP featuring both versions of the song, initially released on the album “So That’s How It Ended…” and featuring Wani on vocals. 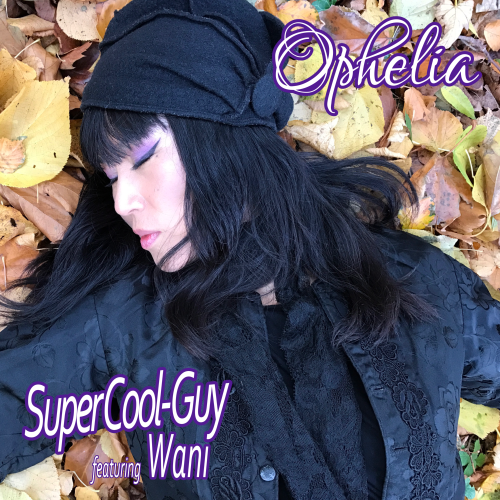 The “Ophelia” EP is available now on all digital music platforms. Here’s the links:

The musical hook and the word “Ophelia” imposed themselves to me, seemingly out of nowhere, and I wrote the rest of the chorus and verse music very quickly.

The verse and chorus have the same chord structure but different melodies, with a modulation on the chorus. What makes the music interesting are these up and down modulation between intro, verse and chorus, and the off-notes in the words “Ophelia/Hysteria” (most of these two words are sung off-note), and particularly the “a” on “Hysteria” (A over A# chord), which give some nice tension.

The song has a slightly unusual structure in that the bridge (or “middle eight”) comes in twice. I guess that I liked it so much, I felt like I needed to hear it twice! Probably because energy-wise, the bridge is the climax of the song, whereas the chorus – while containing the main musical hook of the song – has more of a haunting quality.

I chose to make “Ophelia” about the character in Shakespeare’s Hamlet, watched the classic 1948 movie starring Laurence Olivier and Jean Simmons, read the play, and tried to re-tell her story in the pop-lyric format, focusing more on her feelings – or what I understood those feelings to be – than on the specific events in the story. Put simply, my lyrics attempt to answer the question: why did Ophelia kill herself?

“So that’s how it ended…” felt pretty cool as an opening line: it starts with the end and hopefully hooks the listeners and makes them wants to find out more. I re-used it as the album’s title, where it takes on additional layers of meaning (see here).

Wani is a London-based Korean American singer whose vocal training and influences combine opera, jazz and pop. The song is very dramatic and demanded a passionate and emotional delivery, which Wani delivered in spades across a very wide tonal range.

“Ophelia” is the only song on this album where the lead vocal is one single track. In hindsight, I can now hear a few harmonies that would have lifted the vocal nicely here and there, but mostly, Wani’s voice had enough presence that the song didn’t need harmonies.

The “oohs” and “aahs” on the bridge are typical SuperCool-Guy fare and were sung by me.

This is the version that comes closest to my original vision for the song, but executing it proved difficult, and this track ended up being the last one to be completed for the album.

The idea was an acoustic power ballad that would build up into this huge middle-eight section, and so I threw everything and the kitchen sink at it: adding to the core instrumentation (drums-bass-piano-acoustic guitars), the song gradually builds up with multiple strings parts, power chords, multiple guitar solos, and big “oohs” and “aahs”!

The acoustic guitars were played by the excellent Nicky V, in Nashville, who totally nailed the part.

This was a complex mix and I really struggled with it. In the end, I decided to hire a pro and was honoured to have Adrian Hall mix the track. Adrian is an in-demand mixer, engineer and producer who’s worked with a laundry-list of top acts including Alicia keys, Robbie Williams, Shakira, Depeche Mode, Tori Amos and many more. Surmounting the limitations of the source material, Adrian was able to deliver the great-sounding mix that I could never have delivered on my own.

Viceroy is a good friend of mine and a talented producer who works under various other names. We frequently give each other feedback on our tracks. After hearing an early version of Ophelia in the “acoustic” style, Viceroy offered to have a go at it, and came back with this great electronic take on the song. He went in a direction that I would never have thought of, but works extremely well, and in fact is more cohesive with the rest of the album than my original “acoustic” version.

The final version of the “Viceroy Mix” was a collaboration between us and incorporates a few elements from the other version (notably electric guitars, strings and backing vocals).

Instruments and backing vocals: SuperCool-Guy, except:

So that's how it ended…

He broke your heart, you took the fall

Now you've lost it all

Than live a lie

You were the twig that would not bend

And you broke instead

So precious and true

The madness in you

The regret and rue

Had to take you all the way

The choice that you made

The price that you paid

You had to stay true

You had to give your all, Ophelia

What have you left us…

With the tears and sorrow?

But deep down I know:

Than live a lie

But your heart would not mend

And it broke instead

You had the fire, had the flame

You fought the passion and the pain

You lost and threw it all away

Your fight is over

The tears have drowned you over

You had the fire, had the flame

You fought the passion and the pain

You lost and threw it all away

Your fight is over

The tears have drowned you over