When SuperCool-Guy found out about Japanese idol group “SUPER☆GiRLS” he had to make a blog entry! 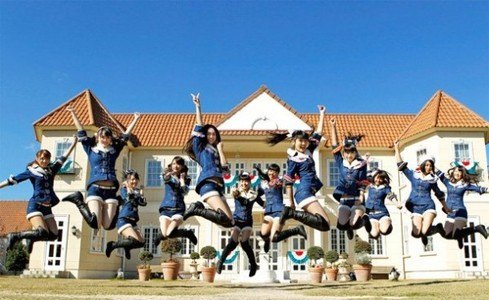 SUPER☆GiRLS (pronounced “supa galzu”) is releasing their second album and new single called “EveryBody JUMP!!” on February 1, 2012 (yay!) – there’s a teaser of the upcoming video: it’s basically a bunch of super-cute Japanese girls jumping up and down – what’s not to like!?

I’ve also made a playlist on my YouTube channel including their first 3 singles:

女子力←パラダイス (which Google translates as “Women's Paradise ← Force”, something about girl power maybe!?  I love how the Japanese can get creative with their punctuation!).  Highlights include the air hostess with handcuffs at 1’31” and moe overdose at 1’43”!

ＭＡＸ！乙女心 (“MAX! Girl’s Mind”) features the girls running around in bikini for about 5 minutes!  Highlights include the English voice-over at 0’35” – “Now you see the girls want to have so much fun like this / They want it anytime / They want it anywhere / SUPER☆GiRLS always like it…” (couldn’t make out the rest, but I’m just terrified of the possibilities…) + too many moments of moe overload to count!