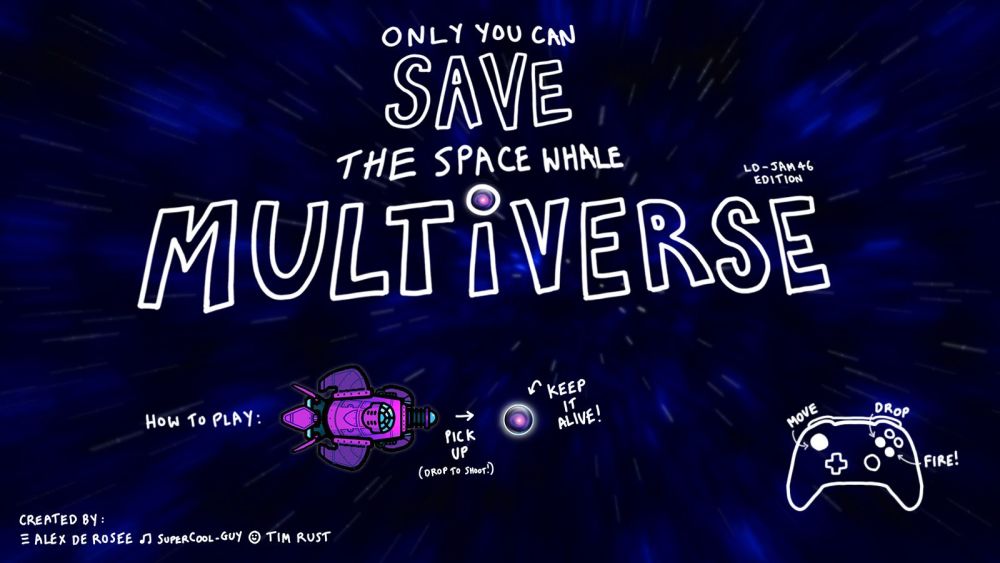 I was given the opportunity to take part in “Ludum Dare 46” over the weekend.
This is a “game jam” where indie game developers have to make a game from start to finish in either 48 or 72 hours… that’s pretty intense! Not a lot of sleep, but a lot of fun was had!

So I teamed up with my friend Alex de Rosée (coding), Tim Rust (graphics), and I did the music soundtrack and sound design.

It’s called “Only You Can Save the Space Whale Multiverse”.

For a game that was made in less than 72 hours, we think it’s pretty cool!

Please try it out! PC and Mac versions can be downloaded from here:
https://ldjam.com/events/ludum-dare/46/spacewhale-multiverse-only-you-can-save-the

The game can be played on the keyboard with CTRL, ALT, space and arrow keys, but it’s quite hard, and plays much better with an Xbox or PS4 controller.

For the non-gamers, I uploaded an edit of the Intro and Battle Themes to SoundCloud, which you can listen to here:

There’s additional themes and sound effects that we didn’t have time to incorporate in this release of the game. Perhaps we’ll polish it a little more and add these in an upcoming “Director’s Cut” of the game?...

Anyway, many thanks to Alex, Tim, the LD Jam organisers, and anyone who will give our game a spin! Hope you enjoy it!