“Party in the Sun” is track no.3 on the album “So That’s How It Ended…”. It is re-released today as part of a 2-track EP and music video featuring a new remix by London DJ Moz. 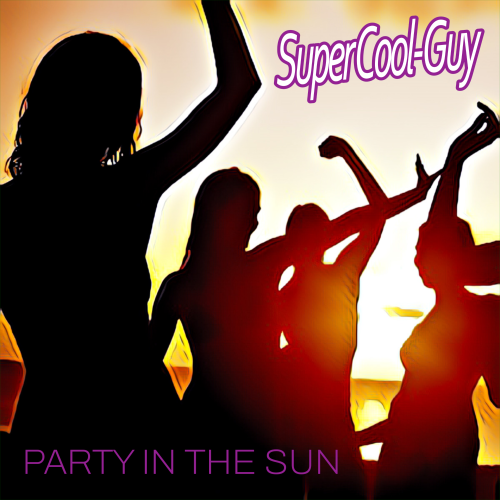 The “Party in the Sun” EP is available now on all digital music platforms. Here’s the links:

SuperCool-Guy · Party In The Sun

“Party in the Sun” started with a lyric by Gavin Clifton and Larry Wheeler. Gavin started it, brought in Larry to “fill in the gaps”, and then asked me if I would write the music.

I followed Gavin and Larry’s verse and chorus lyric exactly – which already included the repeated “party” motif – only making minute fine-tuning to improve phrasing. The bridge lyric, however, was very much a 3-way co-write, including my personal favourite line: “Live the fantasy, Insta the memory!”

For the music, rather than go with the more obvious four-to-the-floor dance style, I chose to do something a bit funkier. Whenever I produce a track, I try to do something that I haven’t done before. I had never written or produced a funk track before.

I went for a very traditional 70’s funk/disco arrangement based around drums, bass, electric piano, guitar, and strings, but added a couple of twists to make it sound current: first, the heavily-processed vocals, which I think make the track a bit reminiscent of Daft Punk’s “Get Lucky”; second, the bridge breakdown, which has become a staple of modern pop and dance music but is typically not found in classic funk or disco tracks.

The drums were played live on an electronic kit, the MIDI was “cleaned up” in the computer and triggers a Studio Drummer kit, with claps added on top.

The bass was rendered with a blend of Scarbee Jay-Bass and Roland’s “Modular Bs 6” patch.

The funky rhythm guitar was programmed with Scarbee Funk Guitarist, and the guitar riff at the end (my favourite part!) was played with RealStrat and GuitarRig5’s “Phased Rhythm” effect preset.

Moz is a London-based DJ and producer who brings a great sensibility for dance music and what works on the dancefloor.

Says Moz, “the song sounded like a disco record, so I tried to push it more in the dance direction, particularly with the drums.”

I love what Moz has done with the track, so we decided to release it as an EP and use it for the music video…

“Party in the Sun” is a feel-good anthem, an ode to good times, summer fun and friendship. I thought it’d be cool to do a fun and sexy video for it and the concept is an extension of the line “Live the fantasy, Insta the memory!”

I want to see sunlight dance on your skin

There ain’t no limit to what we can do

We’ve got a hot summer state of mind

We’ve got a wild side

We’re born to be alive

This party in the sun

Coming together as we fall apart

Going in time to this crazy beat

We keep moving ‘till a new day starts

We’ve got a wild side

We’re born to be alive

Come and strike a pose

Come on closer, smile and hold me

Come and strike a pose